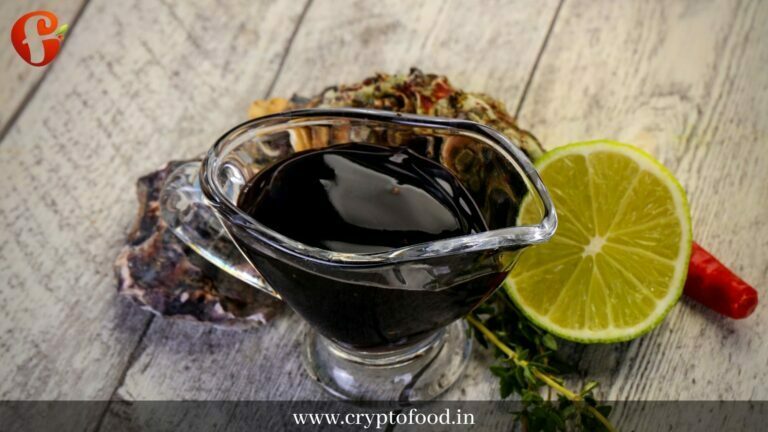 Oyster sauce is a tasty and aromatic condiment that can be used on a range of cuisines and has a surprising number of health advantages. While it can be found in a variety of Asian, particularly Chinese, dishes, it can also be prepared at home.

What is Oyster Sauce

A common Chinese condiment is oyster sauce. This sauce has been used for over a century and is traditionally created from cooking oysters. This earthy sauce is dark brown, thick, and has a deep, savoury flavour that has made it popular among Chinese and other Asian cooks. Although it was discovered by accident when conventional oyster broth was overcooked for too long, it is now a staple in many cuisines, sauces, marinades, and entrees. The original sauce was created entirely of oysters and their natural broth in the nineteenth century.

Many oyster sauce variants now have different compositions. Other fillers and additives that may be present include corn starch, salt, sugar, soy sauce, or MSG. Originally linked with Cantonese cooking, oyster sauce is now popular throughout China and is adapted into other cultural cuisines such as Korean, Thai, and Cambodian cuisine.

The ingredients in oyster sauce have a number of health benefits, but because of the ingredient’s modest portion size, most individuals won’t consume enough of it to notice significant changes in their health. Eating entire oysters would provide a more reliable approach to reap those benefits.

Nonetheless, the nutrients included in oyster sauce offer a number of important advantages, including:

Because oysters contain zinc, they may help to lessen the severity and length of cold symptoms. According to the National Institute of Health, oysters have more zinc than any other food on the globe. Zinc is so effective at boosting your immune system that it’s found in lozenges and over-the-counter cold treatments all around the world.

According to Harvard Health, oyster sauce provides vitamin B12, which is important for brain cell activity and growth. 5 Because vitamin B12 is exclusively found in animal products, people who avoid them are at danger of becoming deficient. Memory loss, confusion, and dementia are all symptoms of a vitamin B12 deficiency.

Oyster sauce contains iron, which helps improve energy levels by participating in oxygen transfer. According to a review published in the Journal of Research in Medical Sciences on iron and its usefulness for human health, over two-thirds of the body’s iron is present in haemoglobin in red blood cells, which transports oxygen from the lungs to the tissues.

The omega-3 fatty acids found in seafood can aid with rheumatoid arthritis symptoms. Researchers found that people who took fish oil had decreased morning stiffness, stiff joints, joint pain, and the need to use anti-inflammatory drugs, according to a scientific literature review published in The British Journal of Nutrition. According to the researchers, this provides evidence that eating seafood and fish oil is modestly effective in reducing symptoms of this health problem.

Oyster sauce contains manganese, which may play a function in glucose balance. Researchers observed that manganese levels were considerably lower in the diabetes group compared to the non-diabetic group in a study including nearly 4,000 participants.

8 Manganese intake should be between 1.8 and 2.3 milligrams per day, and the mineral can be found in oysters.

Helps to Keep Your Heart Healthy

Oysters, like other seafood, are a heart-healthy option. Adults who eat 8 ounces of seafood each week have a decreased chance of developing heart disease.  Seafood is high in omega-3 fatty acids and lean protein. Oysters also contain potassium, which aids in the reduction of blood pressure. Substituting seafood for other types of meat is a good way to improve your heart’s health.

May Aid in the Prevention of Osteoporosis

According to preliminary research, specific components in oysters inhibit the production of osteoclasts, the cells responsible for bone disintegration and loss. Oysters’ protein and calcium content look to be promising for bone health, though further human research is needed to prove this.

Helps to Maintain a Healthy Weight

Oysters are a low-fat protein that can be served as an appetiser or a major dish. Oysters, unlike many fried or breaded appetisers, are high in protein and low in carbs and fats. Protein has been shown to affect multiple appetite hormones, resulting in a feeling of satiety and a reduction in subsequent meal consumption. When dining out, oysters might help you feel full and avoid high-calorie meals with less nutritional value.

Animal-based iron, such as that found in oysters, is more easily absorbed by the body. Animal diets provide us with 2–3 times more iron than plant foods. Oysters are a great way to avoid iron deficiency anemia. Oysters also contain vitamin B12, which helps to prevent another type of anemia (called macrocytic anemia).

If you want to add flavour to your foods without adding a lot of calories, oyster sauce is a great option. 1 tablespoon of oyster sauce contains only 9 calories. The oyster sauce will not derail your efforts to maintain a healthy weight because it contains no cholesterol and only trace levels of fat and saturated fat. The fibre content is quite minimal, with only 0.1 g fibre.

The USDA also confirms that a 1/4-cup measure of Chinese brown sauce includes around 25 total calories, or slightly more than 1% of the calories recommended for the average adult each day, based on a 2000 calorie diet. Carbohydrates have around 22 calories. Fats account for only 2 calories per serving, with proteins close behind at 1 calorie.

Oyster sauce contains 0.24 g protein per tablespoon. This small amount of protein accounts for less than 1% of the recommended protein intake for adults and children. Instead than relying on oyster sauce for protein, try flavouring tofu, chicken, fish, and other high protein dishes with it. If you’re using oyster sauce in a tofu recipe, consider coating the tofu with it before cooking so that the flavour soaks in.

The only mineral found in significant quantities in oyster sauce is salt. With 492 mg of sodium in a single tablespoon, this sauce makes it nearly impossible to adhere to the American Heart Association’s advice of limiting sodium consumption to less than 1,500 mg per day. If you use oyster sauce in a recipe, try to compensate by eating fewer sodium-rich items.

Oyster sauce is a delectable dark brown sauce with a thick texture and a salty flavour. The different health advantages are one-of-a-kind. It is healthful because of the various necessary elements such as Iron, Magnesium, Sodium, Zinc, Vitamin B12, and other components. One of the reasons everyone looks forward to it is because it has no cholesterol and is completely fat-free. You can savour the delectable flavours of a variety of cuisines and culinary items.

You can eat it as a snack or as part of your regular meal. Oyster sauce enhances and enhances the flavour of your cuisine. Also, we must remember that everything has disadvantages and repercussions. As a result, you should keep an eye on your consumption, and there are some fantastic handmade oyster dishes.