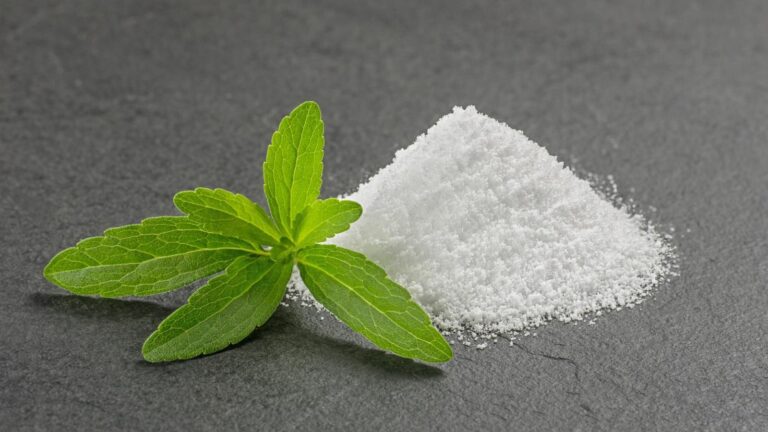 People who are concerned about their health are turning to natural sugar substitutes now that sugar has been identified as the cause of numerous chronic health problems. Because it doesn’t have the aftertaste of stevia or the gastrointestinal side effects of xylitol, erythritol is becoming more and more popular as a sugar substitute.

Sugar is incredibly appealing, thus individuals find it very difficult to substitute it for other foods or to cut it out of their usual diets. However, due to improvements in food industry research, substitutes for conventional sugar have been found and are becoming more and more well-liked on a global scale. Depending on where they are produced, sugar substitutes are divided into artificial and natural sweeteners. Both natural and artificial sweeteners have advantages and disadvantages that should not be overlooked.

The Scottish chemist John Stenhouse founded Erythritol in 1848. This sweetener has been utilised by the Japanese food and beverage industry since the 1990s in a variety of goods including yoghurt, sweets, jams, jellies, chocolates, and beverages. The Food and Drug Administration authorities deemed it a secure sugar replacement for use in the food and beverage sector in 1997. Erythritol usage is currently highly common in the American food processing business. It can be utilised in granulated or powdered form.

Erythritol is a low-calorie sugar alternative that is relatively new to the market and is used to sweeten foods that are either sugar-free or have minimal sugar content. Chemically, it is an alcohol from the sugar family, and like other members of the family, it is used to sweeten food. It can be produced by fermenting natural sugar, which is found in fruits with a lot of sugar. However, the type of erythritol that is primarily employed by the food and beverage sector is produced through the fermentation of starch from GM corn or wheat. People who follow a low-carb, low-calorie, and ketogenic diet frequently use it because it is also well-known as a low glycemic index sweetener.

Since erythritol is more difficult to make than other polyols, it is a crucial issue in research on sugar substitutes. Polyols are alcohols with a sugar backbone that are produced using specific fruits and sugar-free sweeteners. According to research, it is working well for persons with IBS to consume. Erythritol, however, cannot be produced chemically in a way that is economically viable, hence manufacturing must switch to biotechnological methods. Therefore, attempts have been undertaken to enhance concentration, productivity, and yield in this area. The efforts to increase erythritol production and its development over time will be outlined in this summary.

Erythritol is an “invisible GMO component” that is frequently produced from GMO cornstarch. You might be able to utilise it as an insecticide in the future due to its apparent ability to kill pests. For diabetics and others with weight and metabolic issues, this medication is the greatest option because it imparts a sweet flavour without causing an insulin surge or added weight.

Is erythritol ultra-processed or natural?

A select number of fresh or fermented fruits, including melons, pears, grapes, etc., naturally contain erythritol in their juices. However, easily accessible erythritol for commercial use comes from corn and wheat starch that has undergone genetic modification, making it a highly processed sweetener. The majority of synthetic erythritol is created by fermenting genetically engineered starch with yeast. A type of yeast called Moniliella pollinis is employed in the fermentation-based production of erythritol.

Sweetener is occasionally also created from birch plant material, but it is pricey and not often used. Although this sweetener is produced by a very small number of businesses using non-genetically modified sources, it is generally healthier than traditional erythritol.

Is erythritol safe or not?

Erythritol’s safety is debatable for a variety of reasons:

Except in extremely large doses on an empty stomach, toxicology tests have not found any negative effects in mice, healthy individuals, or diabetics. In actuality, a significant portion is quickly absorbed in the upper intestine and passes through our system unaltered, with about 90% of it being excreted intact in the urine.

This sweetener has the capacity to lessen the harm brought on by the generation of free radicals during metabolic processes and is thought to be potentially antioxidant-rich. The rich content of antioxidants in erythritol has been shown in several experiments using diabetic rats to potentially protect against blood vessel damage.

It has a strong track record of success in reducing hyperglycemia, which can help blood vessels function better. According to a study, diabetic patients who regularly consumed 36 gm of erythritol for a month saw improvements in the health of their blood vessels and glucose levels. This sweetener thus demonstrated its effectiveness in lowering the risk of heart problems in people.

Erythritol ingestion reduces tooth decay unlike ordinary sugar. Tooth decay is caused by harmful bacteria that are found in the mouth. The bacteria that rot teeth feed mostly on sugar particles to develop and cause tooth decay. The benefit of erythritol consumption, in contrary, is that it cannot be metabolised by hazardous oral bacteria. Therefore, erythritol users’ risks of developing cavities are greatly reduced.

Benefit for people with lifestyle disorders

In addition to diabetes, a variety of lifestyle problems necessitate routine blood glucose monitoring as a part of treatment. For instance, the majority of PCOD patients struggle with weight control and insulin resistance; PCOD is also known as sister diabetes and necessitates limiting sugar intake. These people with lifestyle disorders may benefit from substituting this low-calorie sweetener for conventional sugar to help stabilise their fluctuating blood sugar levels.

Erythritol is indigestible by humans due to its distinct chemical makeup, and it passes through the digestive system with little breakdown. After intake, the small intestine absorbs this sugar alcohol, which then circulates through the bloodstream without raising blood glucose levels. When it gets to the colon, microorganisms there start to ferment the sugar into alcohol. The digestive system of humans experience gastrointestinal distress as a result of the entire procedure.

Production of erythritol from GMOs Pose a Risk

Human ingestion of genetically engineered crops has never been proven to be safe. Even while erythritol may be made from non-GM crops, producers choose to use GM crops since they produce the product more effectively and at a lower cost. The intake of GM food grains  has long been associated with a number of health issues, including a weakened immune system, food allergies, infertility, and uncontrolled insulin levels.

Keep it separate from other sugar substitutes.

Depending on the plant source used for manufacture, it contains 60 to 80 percent of natural sugar’s sweetness. Few businesses combine this sweetener with other sugar substitutes to boost its sweetness before selling it on the market. Concoction can cause health problem for the individual who is consuming it.

It is a common artificial sweetener derived from genetically modified corn products and has no calories. Although the FDA believes it to be generally safe, there are some erythritol adverse effects to take into account. Even if it isn’t genetically modified, certain people who are particularly sensitive to its effects may experience allergic responses and gastrointestinal trouble.

Non-GMO types do seem to be okay in moderation, and when used as a sugar alternative, it might offer some health benefits. Potential advantages include promoting oral health, controlling blood sugar and weight, and having antioxidant properties.To reduce your sugar intake, there are many different natural, health-promoting sweeteners like stevia, monk fruit, and raw honey that can be used in moderation.

Erythritol seems to be a decent sweetener all around. It has almost no calories. Seventy percent of the sweetness of sugar is present in erythritol. It has no impact on insulin or blood sugar levels. There are reportedly very few negative effects, the majority of which are mild stomach issues in certain individuals. According to studies, over 90% of it was absorbed but not metabolised. It has an extremely slow metabolism. There aren’t enough allergic reactions to warrant a definitive diagnosis. Animal experiments that fed erythritol in huge quantities to animals over extended periods of time show no negative effects.