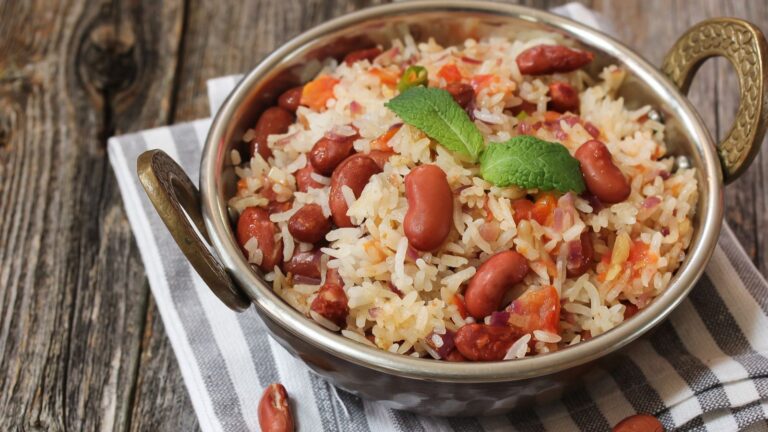 Punjab (often regarded as the land of five rivers and the land of five crops) is famous for its delicious food. There is one dish cooked in every pind (village) of the state. The dish is a staple in all Punjabi kitchens and is cooked to perfection by almost all Punjabis.

As we all know, one of the best Punjabi food is Punjabi Chawal and Punjabi Rajma. But what if you could have both of them at the same time? Well, that is the beauty of homemade Punjabi Rajma Chawal, which roughly translates to “kidney beans with rice”. It is indeed a great combination.

“Maa ke haath ka Rajma chawal” is a misnomer. The Punjabi Rajma has a different taste and texture. There are many variations in the way the dish is made. Some like it without tomatoes, and some like it without onions. Some like it without garlic, ginger, and green chillies. Anyone who has spent time in north India, especially in and around Punjab or Delhi with its sizeable post-Partition Punjabi community, or had some exposure to Bollywood movies knows how comforting the food is.

It is a simple task if you have some patience. It is a tried and tested recipe that most Punjabis swear by.

Let’s talk about the dish and explore the various way that it is made.

Red kidney beans are known as Rajma in Hindi in India. To prepare Rajma masala, they are soaked, cooked, and then boiled with onions, tomatoes, and spices. Rajma is another name for it. It is a traditional North Indian meal served on weekends, at special events, and at weddings.

Rajma is low in calories and abundant in fibre, folate, and magnesium. The high fibre content improves digestive system health, while the folate and magnesium content makes them a heart-healthy diet. Red kidney beans are popular in India because of their health advantages.

How to make the best Rajma recipe?

My precise step-by-step procedure will assist you in producing the greatest Rajma dish ever. While I cooked the beans in a pressure cooker, they can also be cooked in a pan or an Instant Pot. The recipe card below outlines the instructions for cooking the beans using all three techniques.

Make the Rajma base

How to make the best-steamed rice (chawal)?

Enjoy your Rajma channel, and don’t forget to serve that with some thin slices of onions, lime wedges, a simple cucumber salad or mango pickle to add some flavour.

Serve your Rajma masala with Roti, paratha, or naan along with steaming basmati rice, saffron rice, jeera rice, or other rice.

Rajma, often known as red kidney beans, is India’s most popular vegetable. It is cultivated in India, Pakistan, and Bangladesh. It is also popular in Asian nations such as China, Vietnam, Thailand, and Malaysia. Rajma has a high protein content, as well as thiamine, folate, potassium, manganese, copper, zinc, iron, and calcium. Red kidney beans are extremely nutritious and high in protein. You can also use the Rajma in the preparation of various dishes like Rajma Makhani, Rajma curry and so on.

These are best served and consumed the most with rice (chawal). Best Served with Roti, paratha, or naan, and steaming basmati rice, saffron rice, jeera rice, or other rice.

What is Pineapple Pachadi?

5 Herbal Tea Recipes To Boost Your Immunity This Winter